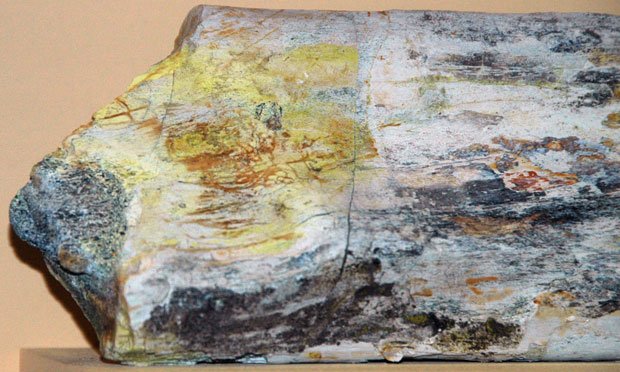 Uranium can be found in soils and waters due to the breakdown (weathering) of rocks that contain it. Groundwater can leach Uranium from host rock and transport it through porous rock layers, like sandstone. Organic remains — especially debris from prehistoric plants — create chemically reducing conditions in sedimentary rocks. These reducing conditions cause uranium ions carried in groundwater to precipitate in organically-enriched zones in the sandstone. The organic debris that captures and concentrates Uranium minerals frequently includes wood, but can also occasionally include fossil bone.

Many of the small Uranium mines you see in southeastern Utah extracted generally small deposits of ore from the Chinle Formation. The multicolored clay slopes of the Moss Back Member of the Chinle Formation represent sediments left from tropical streams, lakes, and swamps during the Triassic period about 230 million years ago. The Chinle Formation is often fossiliferous and fossil finds in this area include freshwater fish, phytosaurs (an extinct lineage resembling crocodiles), aetosaurs, crocodylmomorphs, and rarely — primitive dinosaurs. Organic deposits in Chinle sediments sometimes became mineralized with Uranium and Vanadium and were sought out by prospectors during the Uranium boom of the 1950s.

A fraction of the Uranium ore sent to mills for processing included pieces of petrified wood and, more rarely, dinosaur bone.

Radioactive Fossils in Labs and Collections

A few fossil specimens in museum collections are radioactive enough that the specimens were coated in lead paint to reduce radiation exposure. The main concern for working with radioactive fossils is to avoid inhaling dust created while excavating and preparing specimens. Special care is also required when slicing fossil wood or bone specimens with diamond saws. Some collections reserve cabinets for the low-level radioactive specimens and those cabinets may be monitored for radon, a radioactive gas that is a Uranium decay product. 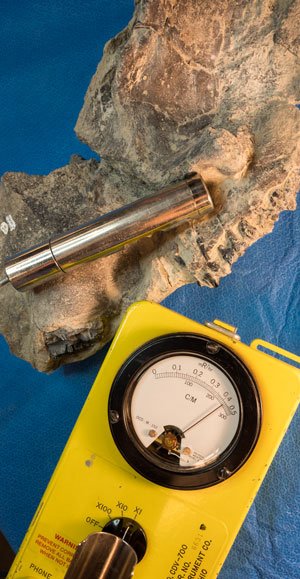 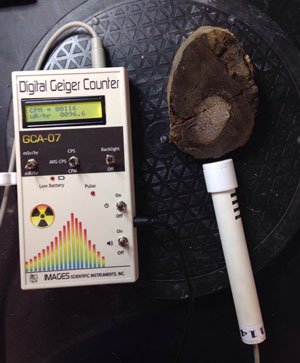 A slice of bone of unknown origin showing radioactivity in the collection of Utah State University in Vernal, Utah