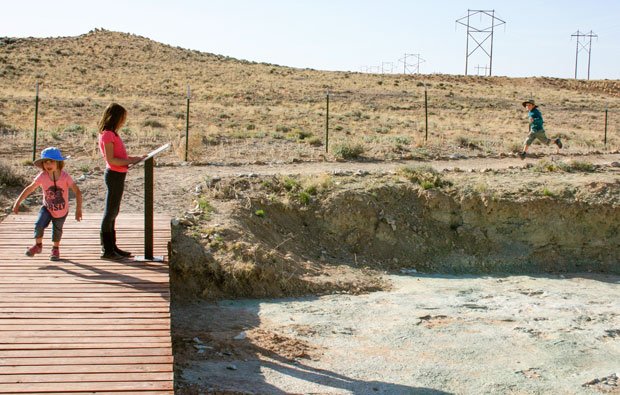 A short, easy hike for families

The Mill Canyon Dinosaur Tracksite contains a diverse assemblage of fossilized tracks. More than 200 individual tracks have been discovered, including tracks from long-necked herbivorous dinosaurs, several types of carnivorous dinosaurs (including sickle-clawed “raptors”), and crocodiles. This site is one of the largest and most diverse tracksites known from the Early Cretaceous time period in North America.

The interpretive trail is 1/4 mile long and is composed of a series of marked paths and boardwalks that form a loop around the tracksite. From the kiosk, take the marked trail down a hill and through a fence, and continue along the trail. Follow the trail from sign to sign. The tracks are fragile and can be damaged by walking on the track surface. Please stay on the trail at all times!

Slide marks on the track layer show that animals sometimes slid on the soft mud of the flat. A dinosaur coprolite (fossilized dung) with pieces of leaves in it was found on the track layer. From this discovery, we know that land plants grew near the lake. Seed ferns and conifers were common land plants at this time in geologic history. Fossilized tracks and traces show that this area was visited by a diverse array of dinosaurs, reptiles, birds, and mammals. 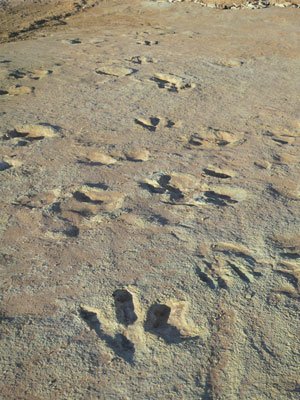 This site has tracks of exceptionally high quality 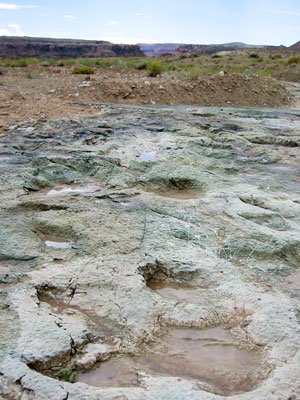 One of the largest tracks of a carniverous dinosaur

How is This Site Unique?

Many of the dinosaur tracksites in the Moab region are preserved in the Jurassic sandstones exposed in the area. At these other sites, only one or two types of animal tracks often are found preserved at any single location. The Mill Canyon Dinosaur Tracksite is Lower Cretaceous in age and represents a different environmental setting than the nearby Jurassic Period sites. This site also contains as many as 10 different kinds of tracks, or “ichnotaxa,” representing dinosaurian, crocodilian, and avian track makers. Several of these tracks are either new to North America or are from animals not currently known to science from skeletal fossils in this area.

Why is this Site Important?

This site is the largest and most diverse tracksite known in the Cedar Mountain Formation. Collaborative research efforts indicate that the Mill Canyon Dinosaur Tracksite is one of the most significant Early Cretaceous tracksites in the world. As research continues at this and other sites, new interpretations will come to light to help us better understand the life and times of the Early Cretaceous dinosaurs of eastern Utah.

Mill Canyon Dinosaur Tracksite is located 15 miles north of Moab on US 191. Turn left on the dirt road marked “Mill Canyon.” Follow signs for the next 0.8 miles to the parking lot for the trail, located to the right in the rock lined parking area. Trailhead GPS Coordinates:
38.720714 -109.733994

Please hike responsibly and practice physical distancing from other visitors. Carry enough water and be aware of the terrain and weather. Please stay on the trail and the boardwalks to protect the tracks. Morning and evening light is best for photographing these tracks.