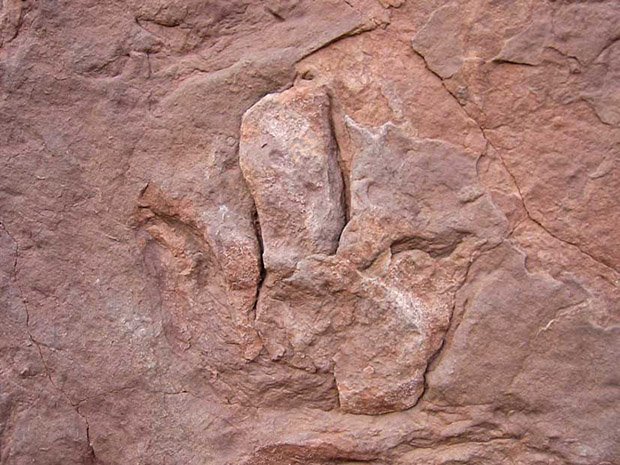 One of the many tracks at the Poison Spider Dinosaur Tracksite

Footprints from approximately ten different meat-eating dinosaurs can easily be viewed at the Poison Spider Dinosaur Tracksite. The tracks are found on two rock slabs which fell from overlying sandstone atop the cliffs.

Poison Spider Dinosaur Tracksite Trail is a 0.3 mile loop trail located along the Potash Road, west of Moab, Utah. The trailhead overlooks the Colorado River and the hike is rated as moderate. The trail is accessible year-round. Dogs may use this trail but must be kept on leash.

The Navajo Sandstone represents an enormous erg, a large landscape of sand dunes.  Around 90 million years ago, this sand area extended over most of Utah as well as parts of New Mexico, Arizona, Colorado and Wyoming.  Between dune fields were scattered flat areas of wet sand, shallow ponds, and small streams. Dinosaurs crossed these flats and left their footprints, which were sometimes then covered by the shifting dunes and preserved intact. Millions of years later, after the sands had turned to stone, blocks containing the tracks have fallen from the cliffs above and split along the bedding planes, exposing the tracks to the sun once again. 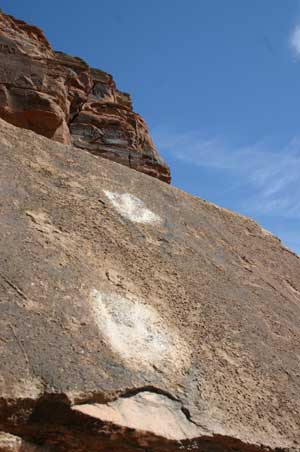 The mold (impression) side of the split sandstone blocks 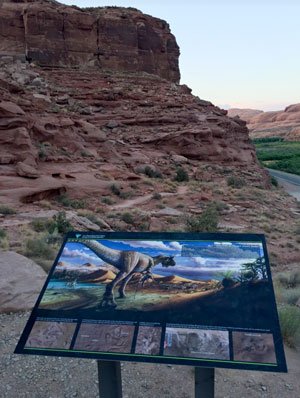 Two large,  flat rock slabs with footprints are visible from the parking lot, one at the base of the cliffs and another halfway down the slope, just above the cliff that drops down to the road. The lower of these slabs contains the tracks of at least 10 different meat-eating dinosaurs, ranging in size at the hip from 17 inches to more 5 feet. The tracks are from theropod (bipedal carnivorous) dinosaurs. The larger tracks are named Eubrontes and the smaller tracks are named Grallator. The animals appear to have been walking at speeds of around 3 miles/hour.

The parking lot and the lower slopes in the canyon are Kayenta Formation, but the blocks with the tracks on them have fallen down from the overlying Navajo Sandstone that caps these cliffs. You can see angled crossbedding that is characteristic of wind-deposited sand layers in the Navajo Sandstone.

Please respect and protect this tracksite. Take only photographs. Visitors attempting to make illegal casts in the past have damaged some of these tracks.

The site is a 15 mile drive north, then west of Moab, on the cliff side of Highway 279.