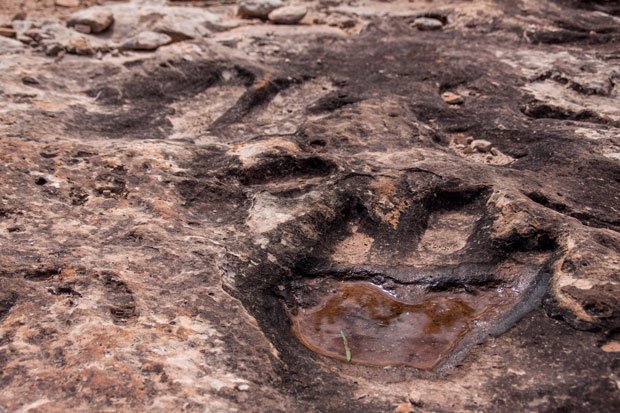 The tracks at Dinosaur Stomping Grounds are preserved in late Jurassic aged Entrada Sandstone (about 160 million years old). This specific formation is also known as the Moab Member of the Curtis Formation. The tracksite is part of a vast expanse of tracks, a megatracksite, that cover this layer of sedimentary rock. When the tracks were formed, the area was a low-lying coastal plain close to sea level. There are over 2300 individual tracks at Dinosaur Stomping Grounds on an exposed area that spans about two acres.

Tracks are important to science because they can tell us many things about living dinosaurs that we can’t learn from bones alone. How fast were they moving? How tall and heavy were they? Were their legs under their bodies, or did they sprawl out to the side? Did they walk on two legs, four legs, or did they mix it up? Did they drag their tails? A surprising number of questions have answers that can be found in ichnofossils (trace fossils). Ichnofossils include footprints and tracks but they also include burrows and many other preserved traces preserved from the activity of ancient animals.

The tracks at Dinosaur Stomping Grounds belong to three-toed predator dinosaurs, probably theropods, and the tracks have been named Megalosauripus. No dinosaur skeletal remains have been found in Entrada Sandstone, so these tracks tell us that the area teemed with dinosaur activity. We can make educated guesses about the trackmaker species (we think a dinosaur like Dilophosaurus), but we can’t know for certain unless we actually found a trackmaker dead in its tracks (no such incredible luck here). 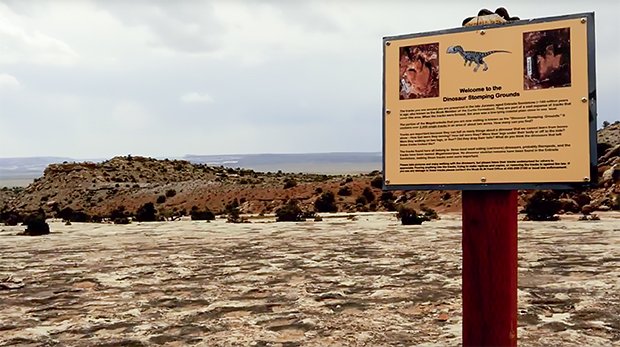 Please take photos and enjoy walking with the dinosaurs, but please leave the tracks undisturbed for others to appreciate. Pouring anything into the tracks (trying to make casts) or removing tracks is against the law. If you see any damage to the tracks, please contact the Moab BLM Field Office at 435 259-2100 or call local law enforcement.

You can access this site by traveling north from Moab on Highway 191 for 23 miles. Turn right three quarters of a mile past milepost 148, cross the railroad tracks, and follow the main road for one mile until you reach a fork in the road. Note that the road is unpaved and it is better to avoid it when it is wet. Take the right fork (the left fork leads to the Copper Ridge Dinosaur Trackways) and continue for a little over half a mile until you reach the Megasteps Biking trailhead. The trail starts from there, following the bicycle trail, then branching off. Look for the cairns marking the way. The trail is a little over 1.5 miles one way, with a gradual uphill slope.

Please hike responsibly. Carry enough water and be aware of the terrain and weather. The map link below has not been tested for accuracy. 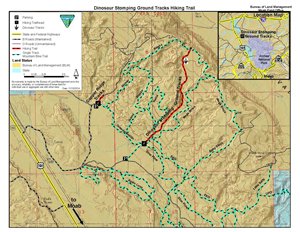