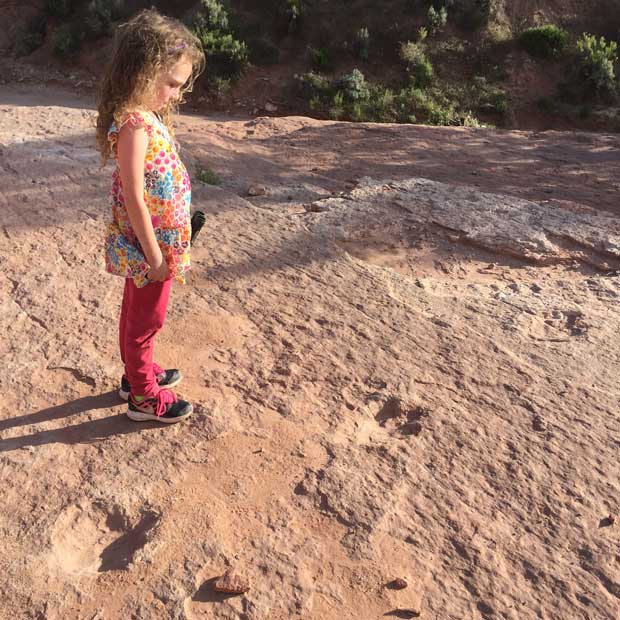 When dinosaurs roamed this location millions of years ago, the rocks that you see today were sand dunes bordered by a low-lying coastal plain. The two types of tracks at the Butler Wash Dinosaur Tracksite were made by meat-eating, bipedal, theropod dinosaurs. Compared to other types of tracks, theropod dinosaur tracks are relatively common in the Jurassic rocks of southeastern Utah, occurring in several places near the Four Corners region.

The larger type of track at this tracksite is called Megalosauripus. Track types are given their own scientific names since we don’t know exactly what species of dinosaur made them. The theropod dinosaur that made the Megalosauripus tracks was a large carnivore, about 7 feet tall at the hip.

This site also contains a number of smaller dinosaur tracks. These tracks are named Therangospodus and were made by meat-eating theropod dinosaurs with well-padded, narrow feet. The dinosaurs that made Therangospodus tracks were just over 3 feet tall at the hip.

Paleontologists can tell from the difference in both the foot shape and stride length that the Therangospodus and Megalosauripus tracks at this site were made by two different species of dinosaurs, rather by than just small and large individuals of one species.

The most notable of these tracks head west—away from the road and toward the wash. These tracks are very similar to the tracks you can view near Moab at the Dinosaur Stomping Ground and the Willow Springs Dinosaur Tracksite. All of these tracks are located in the transitional zone between the Summerville Formation and the Bluff Sandstone Member of the Morrison Formation.

These tracks have survived within the rock for more than 160 million years and now that they are exposed at the surface, they will eventually erode and disappear. At this site, you can see both the original track impressions and the flat layer beneath the tracks called undertracks. The large tracks head east toward the road. How many tracks can you find here?

Be a Dinosaur Steward!

Please respect and protect these important tracks. Making casts of dinosaur tracks harms them and can lead to permanent destruction. Making casts is also against the law. Please photograph the tracks to document your experience and leave this special site as you found it for others to enjoy. 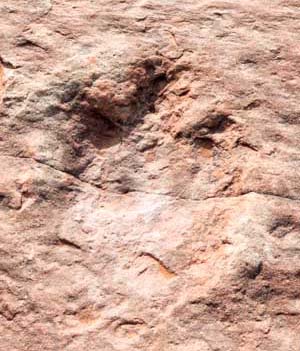 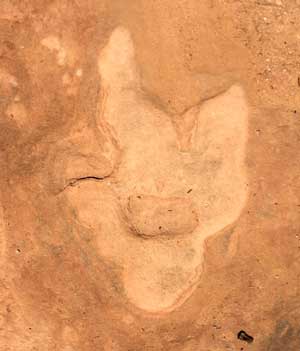 Megalosauripus track made by a large, carnivorous dinosaur

From Blanding, Utah, drive south on US-191 to the intersection with Utah Hwy. 95. Drive 9.4 miles on UT-95 and turn left onto a dirt road. Take the dirt road for approximately 0.2 miles. There is parking on the south side of the road near and interpretive kiosk. A short trial leads to the dinosaur tracks, which are on sandstone exposed next to the main channel of Butler Wash. This site is managed by the Bureau of Land Management.

Please hike responsibly. Carry enough water and be aware of the terrain and weather. The map link provided has not been tested for accuracy.