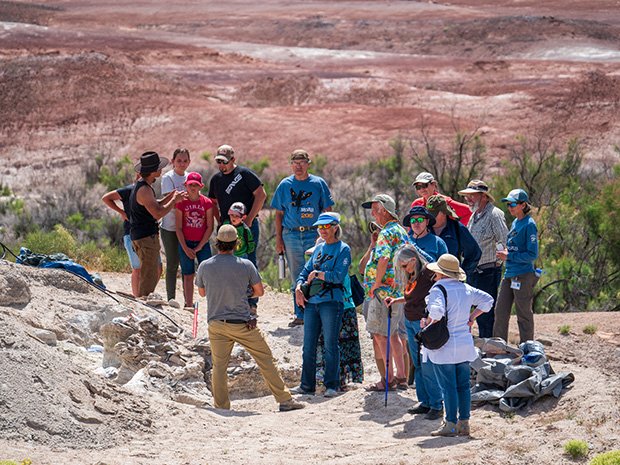 Utah’s world-famous dinosaur fossil sites, Dinosaur National Monument and the Cleveland-Lloyd Quarry (now Jurassic National Monument) feature specimens from Late Jurassic Morrison Formation (152-145 million years old). But Utah also has extensive tracts of Morrison Formation badlands in the vicinity of Hanksville at the southern end of the San Raphael Swell. These lands had been little-studied until fairly recently, when the Burpee Museum of Rockford, Illinois, came hunting for big dinosaur skeletons to populate the Museum.

After obtaining permits and consulting geologists, paleontologists, and land managers, a Burpee Museum crew visited a site that had been known to locals and rockhounds for decades, but that had not been assessed for scientific field work. They realized the site was a major dinosaur bone bed. The Burpee Museum crew, led by Scott Williams and Mike Henderson secured excavation permits and they worked closely with BLM managers to make the site a location the public could visit. The higher visibility of the Quarry discourages theft of vertebrate fossils from these public lands and provides an educational resource for curious travelers to this area.

The Hanksville-Burpee Dinosaur Quarry spans about ten acres, with both isolated bones and partially articulated skeletons of sauropod (long-necked) dinosaurs like Apatosaurus, Camarasaurus, and Diplodocus, as well as Utah’s state fossil, the predator Allosaurus. The site represents the remnant of a river channel system, turned to stone. The caprock in this area is river sediment turned to sandstone and conglomerates. Small fossils of mollusks and plants provide clues about the Morrison ecosystem.

The Burpee Museum is committed to long-term excavation and research of the Quarry site. And where investigation is active, unexpected discoveries will follow. The activity here will benefit paleontology, the local community, and visitors from around the world. 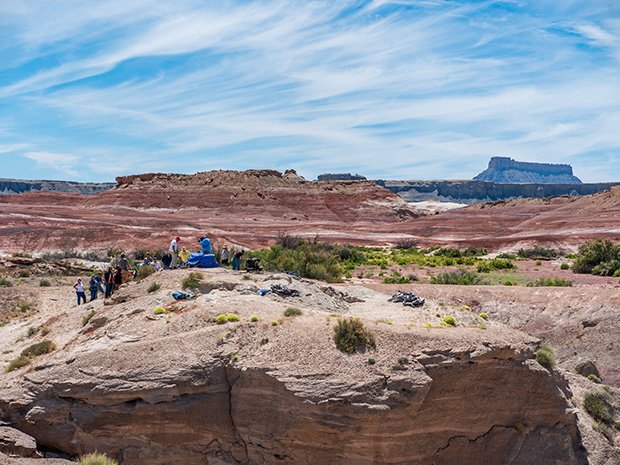 Stunning Morrison Formation badlands, with Factory Butte in the distance