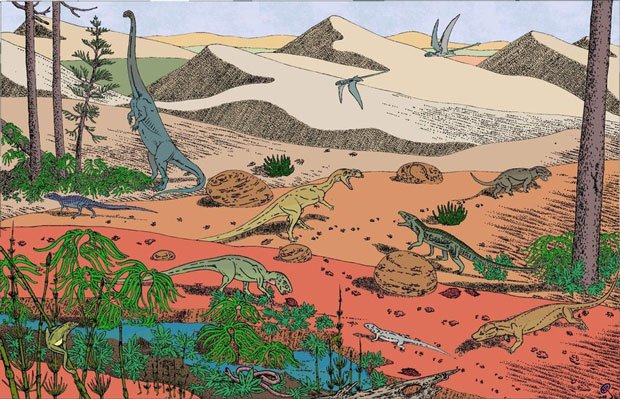 Reconstruction of the Navajo Sandstone interdunal ecosystem by Russell Hawley

The holotype skeleton of Seitaad ruessi was found at the base of a 600 foot Navajo Sandstone cliff on Comb Ridge in southeast Utah. The strata was near the contact between the Navajo Sandstone and the underlying Kayenta Formation. It appears that the prosauropod dinosaur was buried by a collapsing sand dune. The Navajo Sandtone represents a vast region of Sahara-like dunes. While fossil tracks are common in the formation, body fossils are very rare. And Seitaad is the first body fossil found within Utah’s many exposures of Navajo Sandstone. The rediscovery of Seitaad ruessi represents the most complete early sauropodomorph yet recovered from western North America. 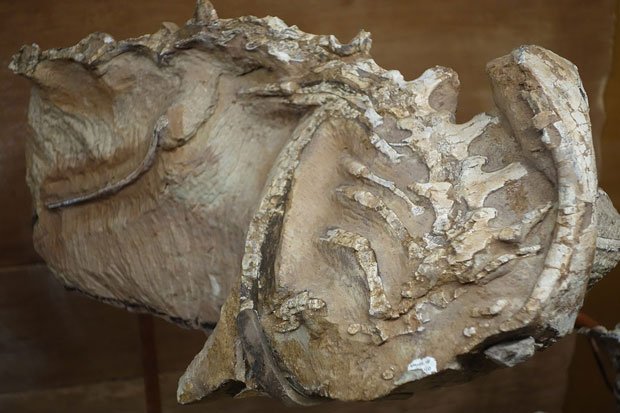 Holotype fossil of Seitaad ruessi (UMNH VP 18040) on display at the Natural History Museum of utah, photo by Jens Lallensack 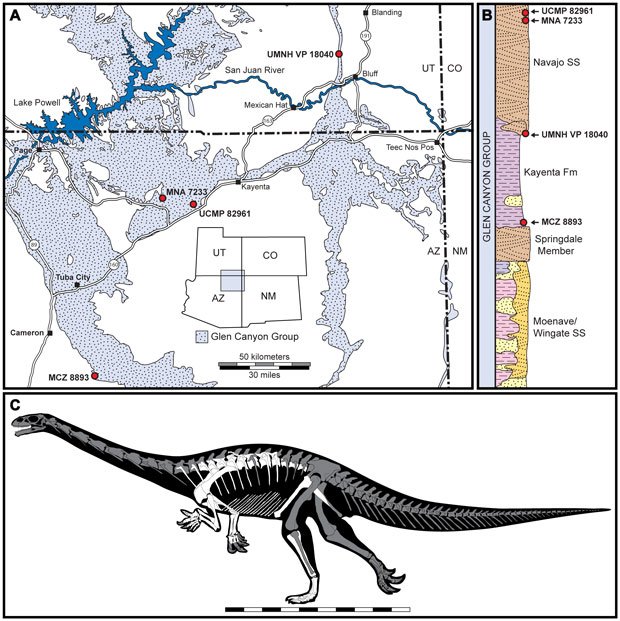 The Early Jurassic (201.5–176 Ma) was an interval of major global climate and species change. The sauropodomorph dinosaurs began to diversify at this time, eventually to become a dominant group of herbivorous dinosaurs — including the largest land animals ever to walk the planet — that would be successful for more than 140 million years. The earliest members of Sauropodomorpha, often referred to as the ‘prosauropods,’ achieved a nearly global distribution by the Early Jurassic. These early dinosaurs were relatively small (Seitaad was about 10-15 feet long) and semi-bipedal.

Seitaad had claws on its hands that were likely for digging. Seitaad, the genus name, is derived from Seit’aad, a sand-desert monster from the Navajo (Diné) creation legend that swallowed its victims in sand dunes. The species name, ruessi, is derived from Everett Ruess, famous young artist, poet, historian, and explorer who disappeared in southern Utah in 1934, and subject on this blog in the past. The name Seitaad ruessi is pronounced SAY-eet-AWD ROO-ess-EYE.

The Seitaad ruessi fossil is articulated, meaning that the bones had not moved from life positions, so they were probably held in place for some time by soft tissues during burial. But a few partially-disassociated limb bones suggest the animal was dead before burial. The science of determining the details of fossilization is called taphonomy, and such study adds considerable depth to understanding the landscapes and lifestyles behind fossil remains.