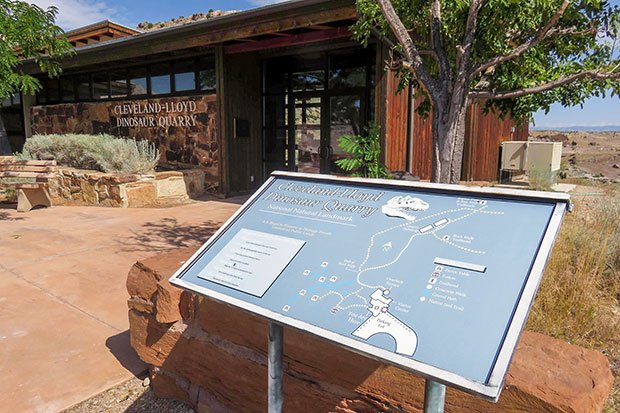 The world-famous Cleveland-Lloyd Dinosaur Quarry (CLDQ) is located in Utah’s San Rafael Swell. CLDQ is part of the recently-designated Jurassic National Monument. The Quarry has yielded the densest deposit of Jurassic dinosaur fossils ever found, and the fossil-bearing layer is in the Morrison Formation, famous for the fossils found in many outcrops in the region.

More than 15,000 bones have been excavated from CLDQ site. The bones from this site are a distinctive black color, and the site in unusual because the most common bones (about 75%) in the quarry belong to the famous Jurassic predator, Allosaurus.

The bones at the site belong to at least 11 different species, jumbled together in disarticulated bonebeds. Recent research by Joseph Peterson and his University of Wisconsin Oshkosh team focused on the deposition of bones and sediment at the site. Their analysis of geochemistry and the condition of the fossils suggests that many of the bones in the Quarry came from dinosaurs that died away from the locality and that were washed into the Cleveland-Lloyd site by seasonal floods. The Quarry site was a seasonally dry depression that became a stagnant pond laden with dinosaur corpses, toxic with algae, and relatively high in heavy metals. Some bones show signs of wear from water-borne transport, and bones don’t show signs like tooth marks, suggesting that scavengers steered clear of the soup.

Scientist are still trying to determine how so many remains of Allosaurus became part of the mix. Perhaps they died elsewhere due to drought or flooding, and their bones were washed into the site with other carcasses. Or perhaps some were attracted to a the toxic pond during drought and died of poisoning.

Cleveland-Lloyd Dinosaur Quarry has told scientist a lot about Jurassic dinosaurs. The site has provided an abundance of Allosaurus fossils in particular, with individuals from various stages of growth. While science has revealed some interesting new clues, the 152-million-years-old site still has it’s mysteries.

Scientific paper on the taphonomy of Clevelan-Lloyd Dinosaur Quarry: