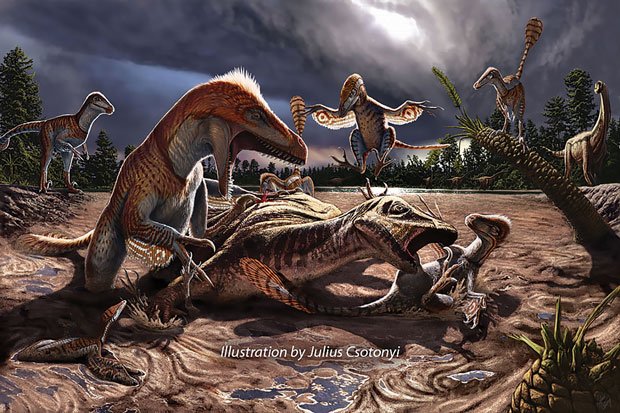 Utahraptor quicksand death trap hypothesis illustrated by Julius Csotonyi. Fossils from this site could show Utahraptor to be social since the sandstone contains fossils from individuals in ages from baby to adult.

Utahraptor ostrommaysorum is a large — around five meters or 18 feet long — feathered, predatory theropod dinosaur from Utah’s Early Cretaceous — about 124 million years ago. Utahraptors sported huge sickle claws on their second toes, with the largest specimen measuring at 22 cm (8.7”) long. Utahraptor is a dromaeosaurid dinosaur — popularly called “raptors” based on the Jurassic Park movie franchise shorthand for it’s sickle-clawed stars. Utahraptor is found in the Yellow Cat Member at the base of the Cedar Mountain Formation in outcrops around Arches National Park in east-central Utah. The oldest Cretaceous rocks in North America are found within the Yellow Cat Member.

Utahraptor was described and named by Kirkland, Gaston, and Burge in June 1993. The type specimens (holotype) of Utahraptor are fragmentary, consisting of some skull fragments, a tibia, claws and some caudal (tail) vertebrae. Like other dromaeosaurids, Utahraptor had large curved claws on their second toes, however Utahraptor is heavily built — a massive and robust animal in its adult form. The largest killing claw specimen, when sheathed in sharp keratin, would measure about 24 cm (9.4 in) on the living animal. Although fossilized feathers have not yet been found preserved with Utahraptor bones to-date, Utah State Paleontologist James Kirkland is confident that Utahraptors were feathered, based on feather preservation in related dromaeosaurid dinosaur species.

The largest described Utahraptor ostrommaysorum specimens are estimated to have reached up to 7 metres (23 ft) long and somewhat less than 500 kilograms (1,100 lb) in weight. However, a discovery by Kirkland in 2001 indicates the species may be more massive than previously estimated. It is thought that Utahraptor is closely related to the smaller Dromaeosaurus and the giant Mongolian dromaeosaurid genus Achillobator. The type specimen, CEU 184v.86, is currently housed at the Utah State University Eastern Prehistoric Museum, although Brigham Young University currently houses the largest collection of Utahraptor fossils. 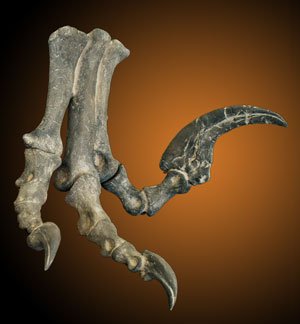 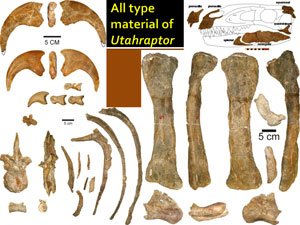 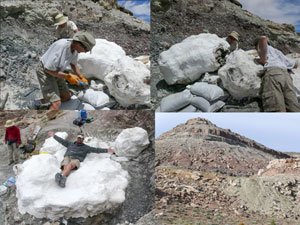 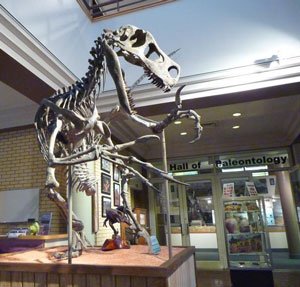 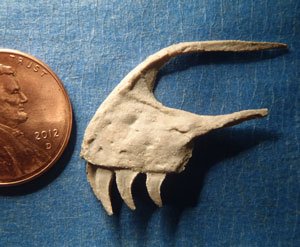 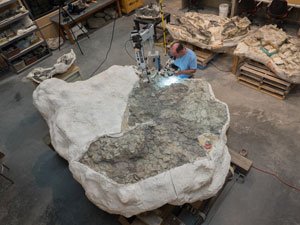 Fossil block from Utahraptor Ridge at the Museum of Ancient Life at Thanksgiving Point in Lehi, Utah

A Nine-Ton Block of Utahraptors

New bones of Utahraptor have been coming to light over the last twenty years, and excavations by James Kirkland’s team at the Stikes’ Dinosaur Quarry, high on a ridge north of Arches National Park, have revealed several well-preserved skeletons of Utahraptor that await preparation. In a nine-ton block of quicksand turned to sandstone, bones of an iguanodontid dinosaur are surrounded by bones from several Utahraptors ranging from babies to adults. James Kirkland hypothesizes that the Utahraptors were attracted to the quicksand trap by the easy prey of the mired iguanodontid. The Utahraptors became mired and and died together over a relatively short period of time. Preparation of this block could provide evidence for pack hunting behavior in Utahraptors. It’s not known how many total individual dinosaurs might be awaiting discovery in this block.

You can help bring new specimens and science about Utahraptors to light by contributing to the Utahraptor Project at gofundme.com/utahraptor